I do not blush to affirm that I have long been a cat man. I love dogs, certainly, but cats are just…different. A dog will love you unconditionally, usually immediately; a cat loves you when it does because it chooses to do so. That’s the kind of companion I can appreciate.

Our family has been blessed with cats for a very long time, since the day my wife brought home two kittens in a box…this after insisting she’d never have another pet in her house, EVER. In this case it was two small kittens, unweaned, one near death. Wal-Mart cats, if you know what I mean and I’m sure you do. We fed them calf milk (we were raising cattle at the time) from eyedroppers and they both made it past the dangerous early weeks and into thriving adulthood. 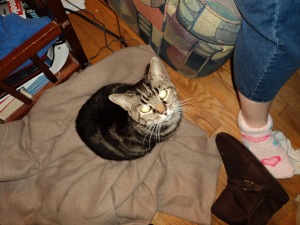 Their names were Tabby (aka Taborina, High Priestess of the Kitikat Tribe) and Ila (aka Naughty Kitty of the Night). Mind you, we didn’t have a lot of room in the house, but we had plenty of room in our hearts. Tabby was strictly an indoor cat, but Ila was the Mighty Huntress, indoors and out, bringing us many “treats”; some alive, some…less so. But she was appreciated for her character and loving demeanor. Between the two of them they lived long, happy lives…16+ years for Ila, and 17+ for Tabby. When they crossed the “Rainbow Bridge” a little over a year apart, all three of us shed many tears, even our 22 year old son. 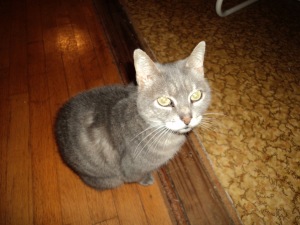 Ila, Naughty Kitty of the Night

We all three agreed that there needed to be a bit of a cooling-off period before we tried to adopt another cat. Tabby and Ila had been members of the family for too long, and you don’t just “replace” family members. They had both been caretakers as well in the passing of our Father and Mother, staying with them throughout and giving comfort to them and all of us when we needed it most, and we felt we owed them such consideration.

I think it was our son who spotted him first. We knew we wanted to adopt a rescue cat, one that was perhaps older and had less chance of being adopted. The pictures we saw depicted an orange and white shorthair that looked relaxed, but with perhaps a wily glint in his eye. We asked about him. Six years old, we were told, good with other cats, not so much with kids. His previous owner had passed away and he’d been looking for a home ever since.

It was a Tuesday. I was on a bit of a “staycation” so we figured there would never be a better time to scope out our prospective family member, and allow him to do the same with us. He was being kept at Petsense in Fairview, about twenty minutes up the road from our home on Breezy Knoll, so we drove down to have a look at him.

My heart broke when I saw him. Not because he looked as if he were being mistreated; on the contrary, he was being treated very well and the people at the store were very kind. It was just that the enclosure he was in was so small for such a large cat…it reminded me of some of the caves I used to crawl around in when I was younger. Cleaner, yes; warmer, certainly, but so very cramped and lonely.

The girl at the store opened the enclosure so I might get acquainted with him. Gently I eased my hand close to him.

He sniffed my fingers. Licked them tentatively.

That was it. That was enough. He needed to be with us. After some adoption paperwork was filled out and signed, we were given a box in which to carry him home. A very small box. VERY small.

Cheeseburger did NOT want to go in that box, but eventually we managed to get him in and more or less comfortable for the short trip to his new home.

Inside. Box on the floor. Open box.

Orange streak bounds out and heads toward the back of the house. Fortunately we had thought enough to close every door in that area save one, which is my son’s old bedroom, now unused. We figured it would be a good hideout for him while he adjusted to his new surroundings. Over the next few hours we took him a food bowl, a water dish, and a litter box and left him to his devices.

The next day, my son tempted him out from his lair long enough to feed him some treats and pet him. I did the same a little later and actually had him rubbing on me. My wife took one of our old cats’ sleep ring and put it on top of the bed, with the blanket the folks at Petsense were kind enough to give us for him, along with a couple of toys he’d played with while in the store. Anything to give him a sense of continuity with his new location. We knew it would be a long process, but we were prepared to wait as long as it took; some sources suggested it might be weeks before he felt comfortable to come out and mix with us.

Weeks? Days. First he allowed us to (gently, gently) enter “his” room and pet him while he lay in the sleep ring. We left the doors open so he could explore the house while we slept. Occasionally we would cross paths during late night trips to the fridge or to the loo; he would dart away at first, but as the days went by, he’d do so with less haste.

We all kept visiting him in the bedroom. My son and I in particular are pretty big guys (Preston is six feet eight inches tall and I am just a bit shorter) and we didn’t want to appear threatening. We called him by his given name–there had been talk of bestowing another, but he seemed to know his old name, so we left it in place. Mostly.

One afternoon I was not feeling well and was lying down to take a nap. As was my custom, I left the bedroom door open so he could come in and go out if he wanted. Next thing I know, he is on the bed with me…and cuddling. He stayed a couple of hours, napped with me, and left while I slept. Progress made…

Later that day, rather abruptly, “Cheezy” carefully padded down the hall and into the living room where my wife and I were seated. He looked at both of us. I offered him some treats. He took them from my hand, then, deciding I must be okay, he jumped onto the chair with me. After a while with me, he joined my wife on the sofa. A little later he climbed onto the top of the sofa so he could scope out what was happening outside the picture window. We have bird feeders out there, you see. High entertainment, like big screen TV.

It’s now been a little more than two weeks. Cheezy is still somewhat skittish, but as they say in racing, it’s early days. He’s still exploring the house, figuring out where all the nooks and crannies are. Good hiding places for his toys. He’s had a ball with a peacock feather. He sometimes will get on the bed with us at night, but he never stays long. He has a new bed now, on the ottoman in the living room, where he can watch us watching him if he’s not sitting with me on my chair watching the races or reading. He just wants to be around us. Yes, a sudden movement will still startle him, but perhaps he’ll get used to this in time. Or maybe he won’t; either way, we will accept and love him. We hope he’ll be a part of our family for many years to come. 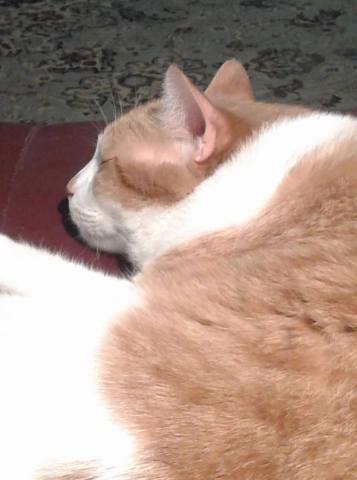